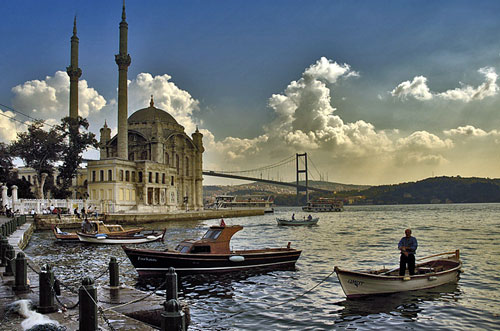 And with it, two new perfumes and some samples. The big one, the one I’m most excited about, Bertrand Duchaufour’s latest effort for L’Artisan Parfumeur: Traversée du Bosphore.

His last three releases for this house, Nuit de Tubéreuse, Al Oudh, and Havana Vanille, were each so good I had to own them ( a full bottle of HV, and 10mL decants of each NdT and AO until I can decide whether to commit to more). Having been created by Duchaufour automatically means I need to smell it—his style moves me regardless of the materials used. I hate tuberose fragrances (hate), but NdT’s electro-green machine tuberose speaks to me in just the right tones.

Traversée du Bosphore sounds like something I’ll like—leather, saffron, spices, turkish delight; on paper it’s great. I haven’t tested it yet (see below re: Balsamo della Mecca), but after I wash my dog and have a shower, the rest of the day is dedicated to it.

The other, Ta’if Roses, the newest rose from Montale. I like almost every Montale I’ve smelled—especially the Aouds!—and I especially like his take on roses.

I’ve also got Carthusia’s Aria di Capri to test; I’m new to Carthusia, but I did recently buy a full bottle of their Via Camerelle, and am quite happy with it.

And, last but by no means least, samples of Cinq Mondes Eau Égyptienne, which was created by Olivia Giacobetti (Safran Troublant, Dzing!, etc.), whose transparent style has been growing on me at an accelerated rate.

Read a great review of TdB over at Now Smell This.